There are hallmarks currently used for gold, silver and platinum jewellery in the Czech Republic.

Hallmarks indicate purity. The hallmarking is visible in the form of a three-digit numeric code. It is used for getting fast information about the type and purity of the metal from which the jewellery is made. The product is marked by an institution independent of the manufacturer or trader. In the Czech Republic these services are provided by the Assay Office.

On gold jewellery you will most often find the code 585 or 585/1000 which indicates 14-carat gold. This combination of numbers is not random, as it might seem at first glance. The amount of precious metal is stated in thousands and in the alloy is 585/1000 gold. Converted to a percentage, it is 58.5 % of the gold in the alloy. For 18-carat gold, the code 750/1000 is used, which also indicates that the metal used contains 75 % of the gold.

Contemporary silver jewellery usually has a hallmark of 925/1000, which indicates so-called sterling silver. It contains 92,5 % pure silver and only in combination with another type of metal, most often with copper, it does become stronger and more resistant. Signs of lower purity, such as 800/1000, can be found on older jewellery or utility items.

Czech hallmarks, in addition to the basic fact that the marked item was inspected and found to be correct in terms of purity, also inform about the metal used, its purity and the period when the hallmark was provided.

These letters are located at the purity number and are oriented perpendicular to the vertical axis of the mark. Products are considered to be properly marked regardless of the workplace or authority that marked them, and no additional testing or marking is required.

Except for the current Czech hallmarks, all hallmarks which have been valid historically in the territory of Czechoslovakia and did not express lower purity than the lowest purities for individual precious metals specified by the hallmarking law (§3, para. 2) are still valid including Austro-Hungarian, Czechoslovak, protectorate and Slovak state brands. For example the hallmark called "lapwing" was used until 1993 for purity 585/1000. Hallmarks, which were introduced during World War II on Czechoslovak territory occupied by foreign states (Austrian, Polish and Hungarian marks), are not valid. Other valid historical marks are published in the brochure of Mr. Bouša "List of hallmarks valid in the Czech Republic", which was issued in 2008 and supplemented as part of a re-edition in 2018. This brochure is available at every branch of the Assay Office.

After the accession of the Czech Republic to the European Union, the hallmarks of some EU member states were also recognized, as of the date of updating this text (January 6, 2016) they are selected hallmarks of Estonia, Finland, Croatia, Ireland, Cyprus, Lithuania, Latvia, Hungary, Malta, Poland, Portugal, Slovakia, Slovenia and the United Kingdom.

deelive.cz is registered at the Assay Office 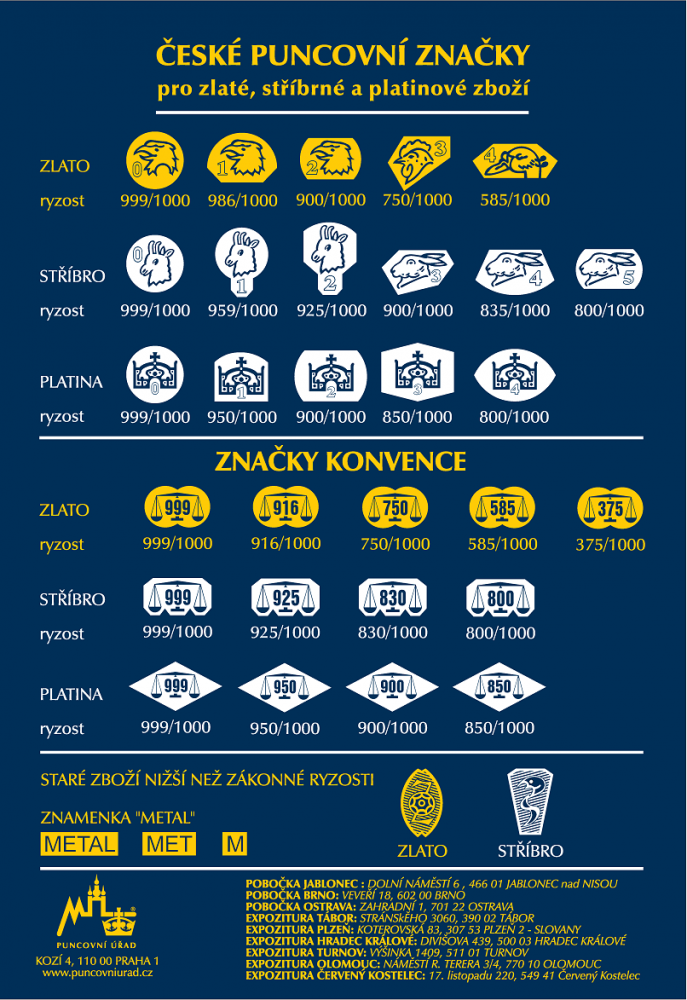 Original handicraft production with a distinctive imprint of Czech designers.

A huge selection of more than 2000 products made in the Czech Republic.

Free pick-up in the deelive design store in the Prague city center.

How to get newsletter by email?